What Happens When Accused Gives False Testimony During Trial? 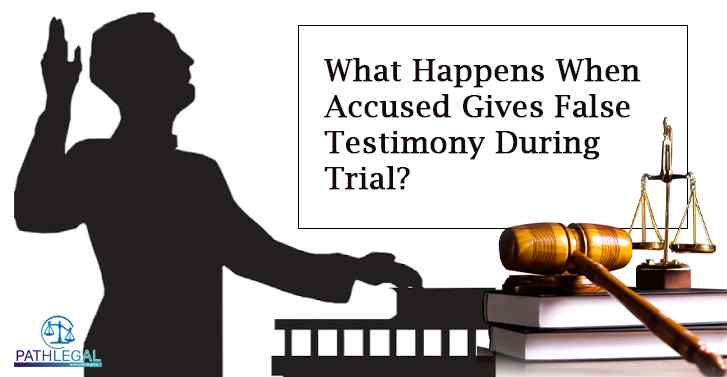 Accused is given an opportunity to place his/her version in a case as this is a right of accused provided under Section 313 of the Code of Criminal Procedure. If a false claim is made intentionally in a judicial proceeding then, the person is liable to be punished.

Now, let us see under Code of Criminal Procedure:

Then, again, it is up to the prosecution to establish that the accused had made a false claim. The claim made by defendants in a suit is also included in this. Making false claim misleads court, delays justice and abuse of process of law.

âIf the prosecution succeeds in proving that an accused in the witness box deliberately made two statements which are so contradictory to, and irreconcilable with, each other, that both cannot possibly be true, he can be convicted of perjury even without its being proved which one of them was not true. It has been held in - 'Queen-Empress v. Ghulet ', 7 All 44 (A); - 'Habibullah v. Queen-Empress ', 10 Cal 937 (B) and - 'Taj Mahomed v. Emperor' AIR 1928 Lah 125 at p. 128 (C) that an accused who is proved to have made two wholly irreconcilable statements can be convicted of perjury without its being shown which one of them was false.

3. Really the question is whether it is proved or not that the accused committed perjury; If he has made two statements which are so contradictory and irreconcilable that both cannot possibly be true, it means that one of them is false and if the other ingredients of the offence are made out, he can be convicted. It is only when the prosecution charges him with making a particular statement falsely, that it has to prove that that statement is false and not the other. In that case the mere fact and that he made the other statement conflicting with it would not suffice because it may very well be that the other statement was false and not the statement with which he was charged. When all that is proved is that one of the two statements is false, it means that it is not proved that a particular statement is false. If the accused is charged with making that statement falsely, naturally the charge must fail.â Further details to be provided by Lawyers in India.