What are the Effects of FIR on a Government Job? 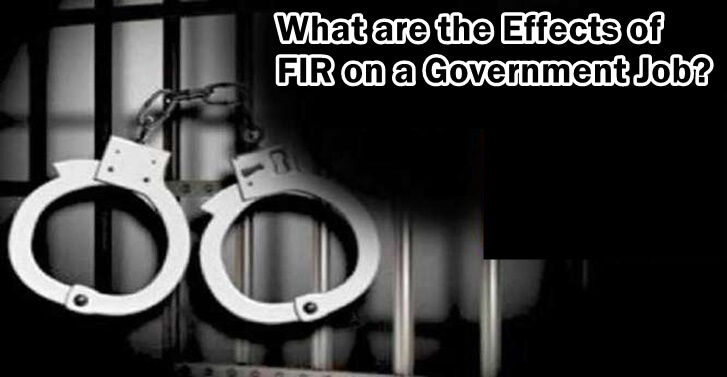 We are living in a place where competition for a government job is very high even though there are reasons that denied you from getting your dream job. Most of the hiring authorities nowadays are looking for a candidate without any criminal backgrounds. Many of them are getting confused that if an FIR lodged against you may be a juncture in your career path. Here we are discussing among the effects of FIR in your career. First of all, one of the important factor that we should aware of FIR. If an FIR pledged in any of the police stations against you which does not mean you are guilty. If you want to attend any exam it is their responsibility to take you to attend the exam in case if you are arrested by the police. You are not eligible for a job if court convicted that you are guilty.

If the charges are registered for criminal code which is similarly explained above that you could not join in the job if the judge found you are responsible for it or you are guilty. Many of the private companies as well the public companies now checking past of the employee that is the background check. Background check meant by they go through the verification process of your academic qualification, work histories, legal and criminal histories, etc.Â  The current employers will contact your past employers for the verification process about your potentiality in work, the role played in previous company and salary, etc. lawyers in India.

MNC âs maybe outsource these background check to other agencies. Government as well go through these kinds of the verification process in their own way such as Aadhar verification which includes most of all kind of information such as residential, biometric, bank account.Â  another important one is the National Academics Depository through this government digitally stores the records regarding education and they issuing certificates for the reliable ones.

(2) Subject to the other provisions of this Act, the passport authority shall refuse to issue a passport or travel document for visiting any foreign country under clause (c) of sub-section (2) of section 5 on any one or more of the following grounds, and on no other ground, namely:â

(a)Â that the applicant is not a citizen of India; WHEN POLICE CAN ARREST WITHOUT WARRANT UNDER INDIAN LAWS?

(b)Â that the applicant may, or is likely to, engage outside India in activities prejudicial to the sovereignty and integrity of India;

(c)Â that the departure of the applicant from India may, or is likely to, be detrimental to the security of India;

(d)Â that the presence of the applicant outside India may, or is likely to, prejudice the friendly relations of India with any foreign country;

(e)Â that the applicant has, at any time during the period of five years immediately preceding the date of his application, been convicted by a court in India for any offence involving moral turpitude and sentenced in respect thereof to imprisonment for not less than two years;

(f)Â that proceedings in respect of an offence alleged to have been committed by the applicant are pending before a criminal court in India;

(h)Â that the applicant has been repatriated and has not reimbursed the expenditure incurred in connection with such repatriation;

(i)Â that in the opinion of the Central Government the issue of a passport or travel document to the applicant will not be in the public interest.

Click on the image to read more about CAN ACCUSE SEEK ANTICIPATORY BAIL WHEN MAGISTRATE HAD ISSUED ARREST WARRANT?