Woman Asks Husband for Rs 30 to Buy Vegetables, He Gives Her Triple Talaq Instead 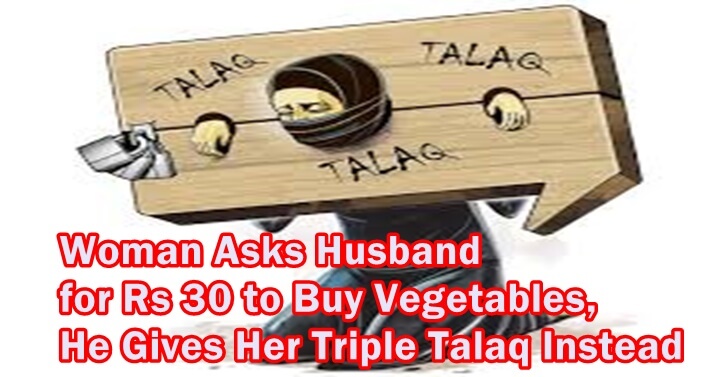 New Delhi: A man thrashed his wife and gave her triple talaq after she asked him for Rs 30 to buy vegetables in Greater Noida's Dadri on Sunday. The complainant, thirty-year-old Zainab, said she was beaten by her in-laws, while her husband â Sabir â attacked her with a screwdriver.

âOn Saturday evening, my husband Sabir, brother-in-laws Zakir and Idris, sister-in-law Sama and mother-in-law Najjo thrashed me. They also gave me electric shocks with a wire,â she said. âMy husband divorced me by triple talaq, spat on my face and ousted me from the house,â she added.

Zainab and her brother Rashid sought their parentsâ help, who live about a kilometer away. âWe reached there and found that her in-laws had thrashed her. We took her to a local hospital for treatment and then filed a police complaint,â Rashid claimed.

The victim and her family alleged that she had been subjected to abuse earlier as well. On one occasion, when she refused to give her earring to her mother-in-law, she was beaten severely.

âZainab refused to give away the jewelry as it was given to her by us. Soon, her parents-in-law started beating her and did not allow any neighbours inside the house,â Zainabâs father Mursaleem said.

He also said that Zainab had fallen sick a few days ago and her husband had brought her to her parentsâ house. On the occasion, he had mentioned that he wanted to give her a divorce.

Mursaleem also alleged that Sabir had beaten his daughter with a stick on her head in the past. He said that their marriage had been strained right from the beginning.

A case has been registered against Sabir and his four family members under sections 498-A (husband or relative of husband of a woman subjecting her to cruelty), 504 (intentional insult) and 506 (criminal intimidation) of the IPC.

We have arrested Sabir and produced him before Dadri city magistrate. He was released on bail on June 30. The other family members named as accused are absconding,â said Niraj Malik, station house officer of Dadri police station. He further added that the matter would be taken to family court.

Zainab and her children have returned to her parentsâ house. A medical report revealed that her allegation of being given an electric shock is probably false.