Woman in Betul, MP Plotted Murder Of Judge And Family, Arrested With 5 Others:âPolice 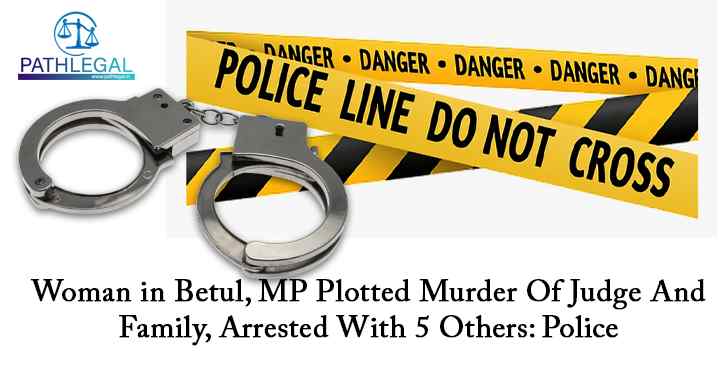 Police in Betul district of Madhya Pradesh arrested six people including a woman on Wednesday for allegedly killing an additional district and sessions judge (ADJ) and his 33-year-old son and also attempting to kill the judgeâs wife and another son by mixing poison in flour.

The woman Sandhya Singh (45), who runs an NGO in Chhindwara district was the brain behind the crime and wanted to eliminate the judge and his entire family, police said.

Besides Sandhya Singh, a resident of Rewa district, the others with whom she hatched the conspiracy for committing the crime include her driver Sanju Chandrawanshi, Devilal Chandrawanshi, Mubeen Khan, Kamal Singh and Baba alias Ramdayal who claims to be a sorcerer. All of them are residents of Chhindawara and have been arrested under sections 302, 328, 307 and 120-B of Indian Penal Code, said police.

ADJ Mahendra Kumar Tripathi (56) and his two sons Abhiyanraj Tripathi (33) and Ashishraj (25) fell ill at his official residence at Betul, 175 kilometres south of Bhopal, on July 20 after eating dinner. They got some medical treatment for two days but when their condition deteriorated they were admitted to a local private hospital in Betul on July 23 where Ashishraj recovered while the condition of his father and brother deteriorated, police said.

The judge and his elder son were referred to a private hospital in Nagpur on Saturday (July 25). Abhiyanraj was declared brought dead at Nagpur hospital the same day while Mahendra Tripathi died on Sunday morning, according to police.

Betul police had already started an investigation after the judge and his sons were moved to hospital. The judge had told the police that their condition deteriorated after having chapaatis (bread). Since his wife Bhagya Tripathi did not eat the chapaatis she did not fall ill.

Superintendent of police Simala Prasad said, âSandhya Singh runs an NGO and came in contact with Mahendra Tripathi during his posting in Chhindwara 10 years ago. Later, ADJ Tripathi was transferred to Betul and Tripathiâs two sons- Abhiyan Raj, 33, and Ashish Raj, 25, and his wife Bhagya also shifted to Betul four months ago. When the judgeâs family shifted to Betul, Sandhya was not able to meet Tripathi which led to altercations between the two. She also had a fight with Tripathi over investing some money.â

âDue to continuous altercations, Sandhya decided to kill Tripathi and his whole family. Sandhya told Tripathi 15 days ago that Ramdayal Baba, the sorcerer from Chhindwara, would end all the problems he was facing in his personal life. On July 20, she gave wheat flour to Tripath and said it had a solution to all his problems so he and other members of his family should eat it together,â said Prasad.

The SP said Ashishraj informed police on July 26 that while going to Nagpur his father had told him that Sandhya Singh had mixed something in the flour.

âOn July 27, we took a sample of the flour for a test which detected poison. When police arrested Sandhya, she confessed to having committed the crime and said Ramdayal had told her that he would mix poison in the flour and nobody would ever come to know about it,â Prasad said.